Update: Heatwave Twice as Likely Due to Climate Change

A team of international scientists says that it is virtually certain that the heat wave that stretched across much of Europe in early July was more likely to happen now than in the past due to climate change.

Based on the synthesis of two independent peer-reviewed approaches, they conclude that heat waves like this now occur twice as often over a large part of Europe, and four times more often in some of the hottest cities. The results are a part of the developing field of “weather attribution” that uses observational weather and climate data, weather forecasts and climate models.

In recent years, more and more “event attribution analyses” have appeared in the scientific literature (see 2014 BAMS Special Report). This current analysis however, was conducted in real-time, providing results as the heat wave unfolded, but is still based on peer-reviewed scientific methods.

As we reported last week, for this ongoing heat wave in Europe, Climate Central convened an international team of scientists from Oxford University, KNMI, Red Cross Red Crescent Climate Centre, along with regional partners from CNRS (France), DWD (Germany), and MeteoSwiss. They produced a preliminary analysis of the annual maximum of 3-day maximum temperature based on observations up to July 1 and forecasts up to July 5.

It is important to note the difference in results between the first phase of this analysis and the updated version using observations. The increases in likelihood are in good overall agreement for each of the 5 cities. Return time agreement was also good for the stations in the west where the majority of the heat wave had already occurred (i.e., Madrid) or was occurring (i.e., De Bilt). However, the return times changed substantially in the eastern stations where the peak of the heat wave was up to five days into the future (at the time the first analysis was done). The following table below shows how the forecast temperatures for each city verified with observations:

Now, that analysis has been redone using observations up to July 6, by which time the heat wave had subsided over most of Europe. The scientists used two independent methods in this analysis, allowing for high confidence in the results. In one method, a statistical analysis of observational records was performed (using the KNMI Climate Explorer) to compare this summer’s heat with summers during the early part of the century, before global warming played a significant role in our climate. This detects trends but cannot attribute the causes.

The second method, conducted by our researchers in Oxford, uses a large computing network (weather@home) to simulate the likelihood of seeing days as hot as those Europe has been experiencing over the past week. At the same time, we also simulated a summer without human-influenced climate change. Comparing those two “worlds,” we found that in the 5 cities analysed, the current conditions are now at least twice as likely due to climate change. The model does not include the urban effects that are accounted for in the methodology based on observations of urban stations.

“The regional weather@home model serves as a nice way to do an independent check on the observational analysis,” said Oxford’s team lead Friederike Otto. “Think of the combined results as a good first step towards answering the climate question.” In this case the Oxford team was a bit limited because the observed sea surface temperatures that drive the model are not yet available. Instead, the summer of 2014 was used as a proxy. The team felt the choice was solid because the influence of the exact sea surface temperatures on summer temperatures in Europe is small compared to the overall effect of global warming. 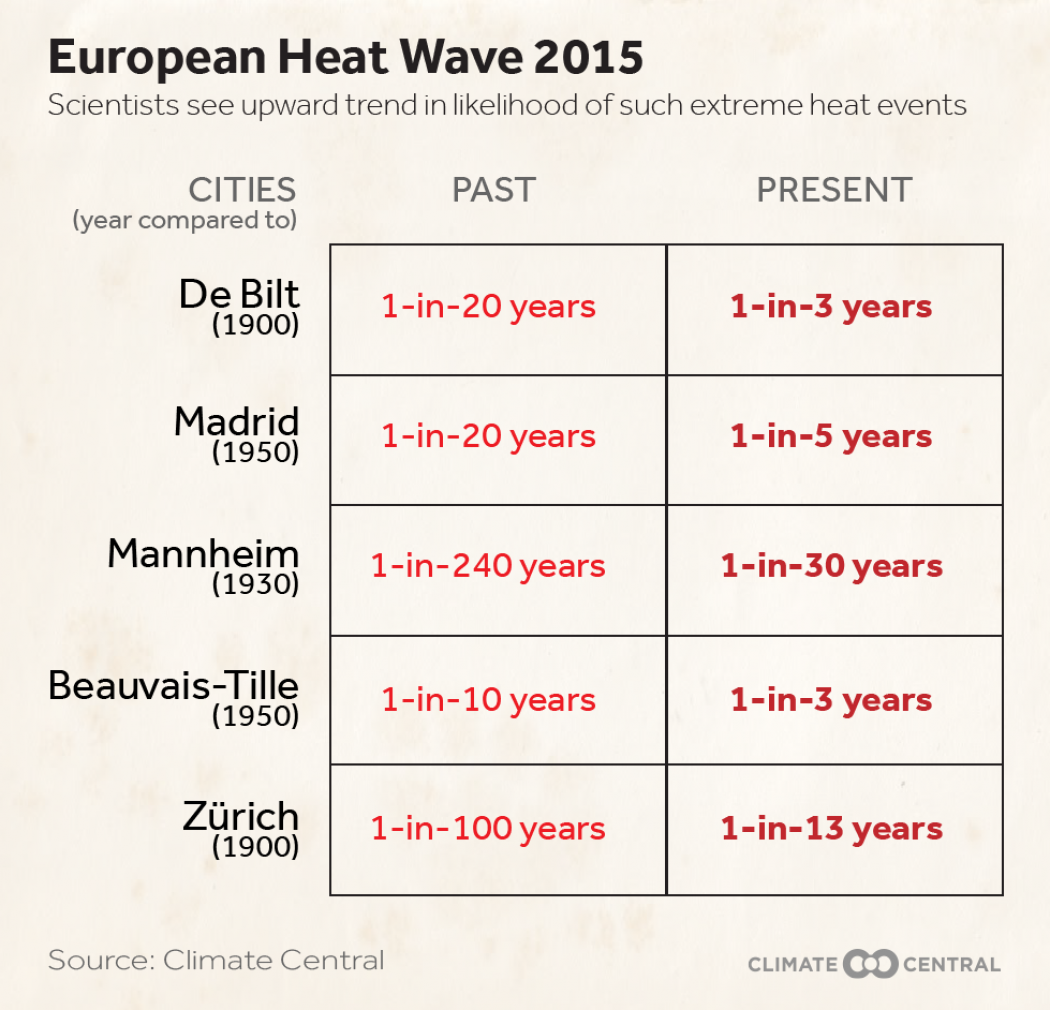 Read Nature’s coverage of this story: